Keeping Spiders Out Of Your Home Did you know that, even now, you’re no more than eight feet away from the nearest spider? We’re not trying to scare you. But many people in the Midwest think they can ignore pest control during our bitterly cold winters because all spiders die during winter—right? Wrong: Plenty of them manage to survive below-freezing temperatures by coming indoors.

If you happen to see a spider skittering across your kitchen floor in the middle of November, you might imagine it’s yet another pesky intruder. But what if we told you that spider may have been there as long, if not longer, than you? Why Are There Spiders in My House?

Spiders are not insects—they’re arachnids. There are several differences between these two classifications (for example, one has six legs, the other eight) but the main difference is that insects want to eat things inside your house while arachnids want to eat those insects. They also just want to be left alone; unlike other common Illinois household pests, they live very solitary lives and try to stay out of sight as much as possible.

In fact, only about five percent of the spiders you see inside have ever set foot outdoors. Of the other 95 percent, there is a specific subset of spiders called “house spiders” that have lived symbiotically with humans since Roman times. They have adapted to life indoors, with a constant climate and very limited supply of food and water

Why Am I Just Now Noticing House Spiders?

Chances are, the house spiders you find in the fall and winter months are males that originally hatched in the spring, and now they’re competing for two things: food and mates. Often, house spiders are found trapped in sinks and tubs, which leads people to assume they’ve somehow come indoors through the drain or plumbing fixtures. In reality, these are simply thirsty house spiders that went looking for a sip of water and got stuck.

Common House Spiders in The Midwest

Unlike their outdoor cousins, some of which go hunting for their prey (like the wolf spider), the majority of house spider species prefer to construct elaborate webs to catch their food. They’re also rarely larger than half-an-inch in size, which makes sense when considering how they’ve adapted to survive with relatively small amounts of food. The following are a few of the most common species of house spiders found in Midwestern homes and businesses: 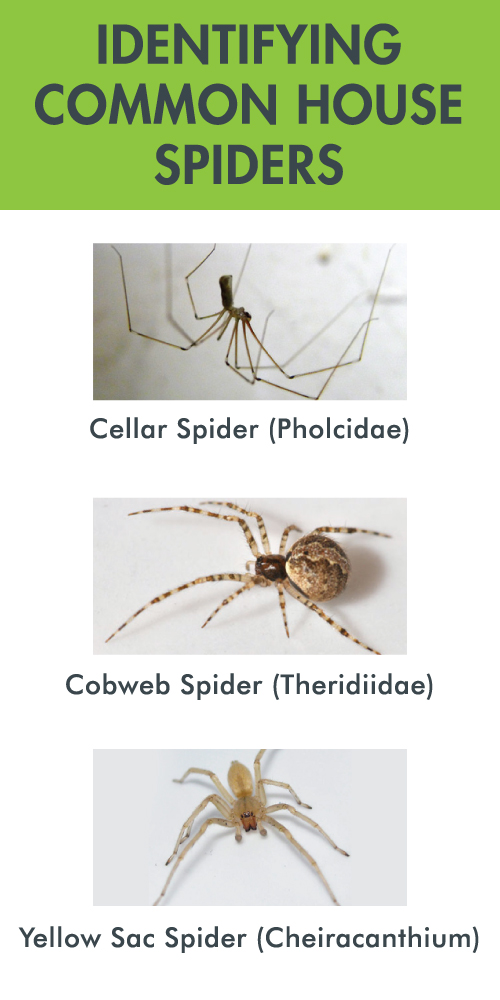 How Can I Get Rid of House Spiders?

The same general rules for pest control apply to spider control. First, you’ll want to identify the type of spider you’re dealing with. As we said earlier, most indoor spiders are house spiders, and therefore not dangerous. In fact, they’re one of the most “eco-friendly” methods of pest control you can find. But that doesn’t mean you should be forced to live with them. To prevent house spiders from setting up shop in your home or business, make sure to inspect any boxes or pieces of furniture for egg sacs or live spiders before bringing them inside. You should also take the time to locate and seal any potential entry points around your foundation, walls, or windows. While this won’t do much to curb spiders already indoors, it will cut off their food supply, forcing them to either move somewhere else or die out.

You can also set sticky traps in specific rooms to determine which areas have the most house spider activity. Spiders that walk over these traps will stick to them and die of starvation; however, this is not the best way to control a large infestation. As usual, your best bet is to contact an Illinois pest management specialist like Anderson Pest Solutions that specializes in spider control. We will use a combination of techniques proven to effectively eliminate spider infestations quickly.

<< Back to Spider Exterminator Services

Keeping Spiders Out Of Your Home