Habitat: Paper carton nests made up of chewed cellulose found in the ground, eaves, or attics.

Yellowjackets in Illinois and Indiana

Yellowjackets are the most known type of wasp, and they are very common nationwide., These beneficial wasps live in colonies with thousands of individuals and would be a lesser threat to humans, were it not for their opportunistic behavior of nesting in structural voids, attics, and cavities associated with landscaping features. Adult yellowjackets feed mainly on fruit juices and other sweet liquid materials. Larvae, on the other hand, fed bits of soft-bodied insects such as flies and caterpillars.

Yellowjackets can be divided into ground nesters (which frequently use old rodent burrows) and aerial nesters. Above-ground nests are found among the leafy branches of trees and shrubs and also on structures. Occasionally, the nest may be constructed on the side of a building, in wall voids, under eaves, crawlspace, and attics. There is typically a hole located at the bottom to indicate the opening of the nest, These aerial nesters don’t become scavengers in the fall, but they are extremely defensive when their nests are disturbed. Locating the nest, through observing flight patterns, is essential to controlling your stinging insect problem.

Like many types of stinging insects, yellowjackets will sting when their nest is disturbed. However, yellowjacket stings pose a more serious threat to humans than bees, because a yellowjackets stinger is not barbed like a honey bee, allowing it to sting repeatedly. Some individuals are more sensitive than others, due to allergic reactions, and should seek medical attention when stung. These wasps get especially aggressive in the fall months as resources begin to dwindle, making them more prone to stinging those that threaten their nest.

While rare, sometimes yellowjackets living in wall voids chew their way through the drywall and enter the structure’s living space. In this case, or if you notice a nest forming near your property, it’s important to always enlist the help of a professional wasp removal company. 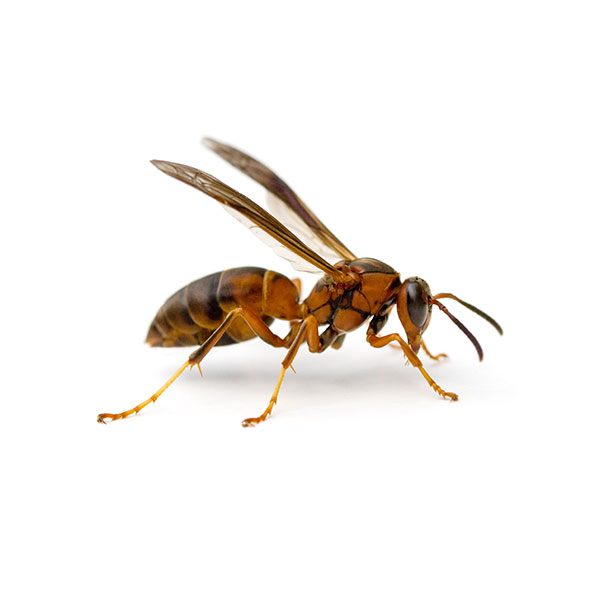